Home Sustainability, Environment and our Business Fixing The Hole In The Driveway

Fixing The Hole In The Driveway

dwadmin May 19, 2019 August 23, 2019Sustainability, Environment and our Business, Uncategorized

Fixing the hole in the driveway

Down our driveway, there was a hole that needed fixing. We have about three lots of pipes laid underneath the gravel I started to notice a hole down the driveway I went to investigate it was where two of these pipes had not been completely sealed at the connection. So I need to fix the hole in the driveway. As you can see by the photo below it wasn’t particularly huge and it was in the middle of the driveway. The suggestion was to take up the driveway reconnect the pipes and do it properly however the money was not in the bucket so I decided that I would look into seeing if I could fix it myself. I like to upcycle leftovers wherever possible and we had several leftover tile pieces and some river rock with mud in them. These have been dug out when we did the cattery outside area and covered the area in concrete, and left a spare pile on the other side of our driveway. So I wandered down the driveway with the bucket of river rocks and soil along with hammers and tile pieces getting heavier and heavier with every step I stopped and put it down and went looking for the hole, I found the hole a few metres ahead and went back and got the bucket. 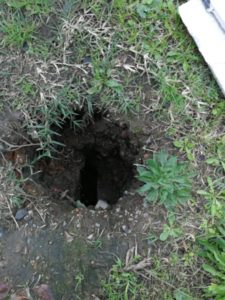 I had also taken down a hammer or two to give me some help with breaking up the upcycled pieces of tile I was going to use. We had some tile that had been leftover from a job we did about 2 years ago. (We laid tiles on our wall to help with keeping it clean from the dog slobber and its made a huge difference to the walls and cleaning.) They were just strips and pieces and we were unsure how to get rid of them as we don’t have an on an inorganic rubbish collection. On further inspection I found that the pipes were also at different heights so I had to break the tiles up and place them as if they were a ramp from one pipe to the other I tried to pack them in as tight as I could and I still had a hole to the left that needed fixing in the so I pushed a tile down in the opposite direction over the top hoping that  would allow water to run through but not soil and therefore the pipe would not be blocked.

I needed the pipe to stay as clear as possible as it took off all the water that ran onto our paddocks during winter and as we live on a river bed there is a large amount of water at times that needs to be removed rather rapidly. As a side note, I also know that the wildlife and my cat’s use those tunnels as a getaway hideaway or an escape route between properties and for safety so I wanted to make sure that they were still able to use these. Once I had placed the tiles and I then poured in the soil combine mix with River Rock and pushed it down hard with my hammer I put in another layer in another name to find you I was at the top and I stood on it and I stamped on it well to make sure that it wouldn’t move I then put what little rope River Rock was used in another puddle on our driveway in the hopes to help build it up a wee bit. So if you ever find yourself with little bits of tile and some river rock and a hole in your driveway I hope you are also able to give this upcycle of fixing a hole in the driveway a try. 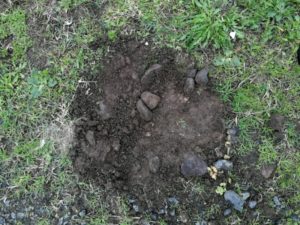