An ode to Lace

Newflands CEO, Fiona, shares her thoughts after losing a furbaby and much beloved member of her family

So I have been putting this off for a week and it still doesn’t get any easier.

One day back in 2003 I agreed to have one of my Newfoundland dogs used at stud in return for a puppy. 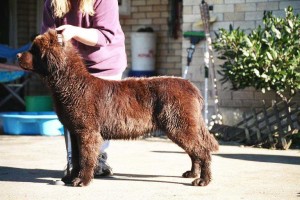 All I wanted was a puppy to love and show I didn’t care what sex or colour – I just wasn’t keen on brown.

Well, karma bit me on the bum and I ended up with a brown girl- the only girl in the litter who I called Lace (photo about 8 months old). I have seen very old antique lace and it ages to a brown and this reminded me of the colour of our new girl’s coat.

I brought her home and the very first memory I have of her at home is trotting up the fence line with the other puppies at the time who were four weeks older than her. She was the odd one out because up until that day I had only had black Newfoundlands.

I started to show her and she enjoyed the ring she loved going away with Bella – her saint buddy and camping at different show venues. She loved Beau her half-brother, but not doing the water trials like him in fact for the first 4-5 years we couldn’t encourage her to swim then after that it was on her terms – when she wanted to.  In fact, the weekend before we lost her she walked in her wobbly way to the other side of the carpark sat down and refused to come for a swim basically giving us the two-fingered salute when I was only asking if she would like a swim to cool off in the hot weather.

She had the densest darkest chocolate brown coat I have ever come across in a Newfoundland and when she was spayed it became even more, dense. However, she loved to be groomed and preened and pampered she loved to be the centre of attention and when she understood what to do it the ring I was just the attachment on the end of the lead she certainly could have done it all without me.

She got to be well known around the ring when she was being shown and was loved by quite a few people from different groups with different breeds and although she wasn’t a huge winner she had the x-factor that the show dogs need of look at me I am the one and only.

At home, she produced two lovely litters of her own; one to our home bred boy Jet and one to semen from Italy. However, she was not doing the cleaning and so I had to step up and be the cleaner for her litters. She wasn’t really into being a mother and was quick to wean her babies and get back to the life she enjoyed of being the centre of attention.

She was also a lover of routine over in the kennels where I feed everyone or leave them when I am not home she chose a pen as a puppy and that was it – it was always Lace’s pen. I often thought she was slightly autistic or maybe much too clever she was just a Newfoundland, you couldn’t put in a single category as she would then do something that was outside of the conventions for that category.

When she retired from the show ring she took to chasing rabbits as a hobby and landscaping their warrens, one night I woke at 2 am to no Lace in my bedroom. Fearing the worst I panicked and went looking for her needless to say I found her in our orchard – well heard her, she was underground relentlessly pursuing a rabbit warren she was around the corner so I couldn’t see her with a torch and had no idea how deep luckily she slowly backed out and came away – I am sure she had a huge smile on her face I couldn’t see in the dark! The next day friends had seen the warren and one of their sons went in to see if he could get to the end which he couldn’t so needless to say the warren was collapsed and we still have a depression by the feijoa tree where it was.

Lace also took part in many public gathering whether on official free cuddles outings promoting different things, pet expos or raising funds for a variety of charities, wherever she went she would stop people and sometimes traffic – she even stopped a bus load of tourists once and they all piled out to have their photos taken with her. When out in public is a given with a Newfoundland that it will always take longer as you are stopped by people wanting to know more but when people came here to visit it was often Lace who became the favourite and was the centre of attention. She got herself over time a great little fan club.

She loved doing a photo shoot in August 2007 which I didn’t know then would make her even more special as she became one of the three dogs on our labels in 2010.

After we lost Rosie she took up the reigns and until the day she died she was the boss.  At first a little unsure of the title as she had been in Rosie’s shadow, but as time went on she loved it and would always keep the others even visitors aware of who was boss. She had her own style of running the place and no one crossed it.

Lace was one who didn’t really play with other dogs but she would sit and barked while others played. Tizzy our skin girl and nurse took to keeping an eye out for Lace as she had done with her nana Rosie and Ebony. As Lace aged her walking became less and if we snuck off without her she would always tell us off when we returned, she really hated to be left out. She found it hard to eat so we had hand fed her for the last 18 months but on occasions she would eat herself, so I think some of this may well have been her way of attention seeking. She readily ate biscuits and given a chance would steal treats, or dinners that were not hers and eat those unaided.

Last Easter with the help of my nephews we built a gate so she could go directly to the front paddock- she loved it and then this summer we bought a pool which once she was in she also enjoyed but she wasn’t keen on the getting out. I cut her coat off the last couple of summer as she just couldn’t cope with the heat or get up ramp into the bath.

Although her rear was getting weak she never did the turning grey around the muzzle so when she was lying down you would have thought she was a young healthy girl and if you walked past she would always roll so you had to stop and give tummy rubs, now we can no longer and she isn’t lying across the kitchen as my back up for keeping the others out and first in line for offerings, she isn’t at the foot of the bed or curled up on the couch or sitting in the paddock surveying the world, or giving me her evening cuddles – there is just a massive emptiness instead.

Losing a Furbaby and a beloved pet is hard – don’t let anyone tell you different they are your family and make your memories and give you experiences not otherwise possible, give yourself time and your other furbabies to grieve. My crew have been so comforting. Fleur will take up the reins now in her quiet way but I know she misses the older girls.

We chose a plum tree in our orchard for her final resting place. Lace gave us a wonderful eventful 13 years 2 months and 5 days of unconditional love and taught us so much including how to love browns. We miss our Lacey Gracie. 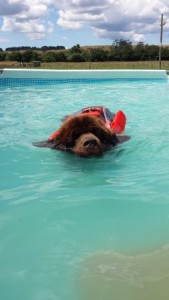 Newflands is open for business

While New Zealand is dealing with Covid you need to know we are an essential business we are open and can take sales online. We have appropriate health measures in place which enables orders to be couriered to you. Please make sure your address is clear and correct at the checkout. If you have any questions just ask we are here to help you help your furbabies with what they need at this time.

Stay home and stay safe for them.